Metal Queen DORO Pesch is about to rock the United States very soon!

The two leg tour starts on April 17 in Las Vegas, NV and conclude on May 11th in New Bedford, MA. Tickets for the dates are on sale! Watch the special tour message from DORO about the tour.

Fans can expect a best of Warlock show with all the highlights from the 80´s, when Warlock conquered the metal world with smash hits like “All We Are,“ “I Rule The Ruins,“ When East Meets West“ or “Für Immer,“ and their famous album “Triumph & Agony“ sold over 5 million copies!

“We will play all these hits“, DORO promises. “But we will also have a lot more stuff ready from our latest albums!“ So fans can expect a nice dose of brand new DORO songs from the latest highly successful albums Forever Warriors and Forever United. DORO announces: “We sure will play our new anthem ‘All For Metal’ … and look out for other new show highlights like “Bastardos”, and “Blood, Sweat & Rock ´n´Roll”.”

Images Of Eden will be joining Metal Church and Doro Pesch on all dates. 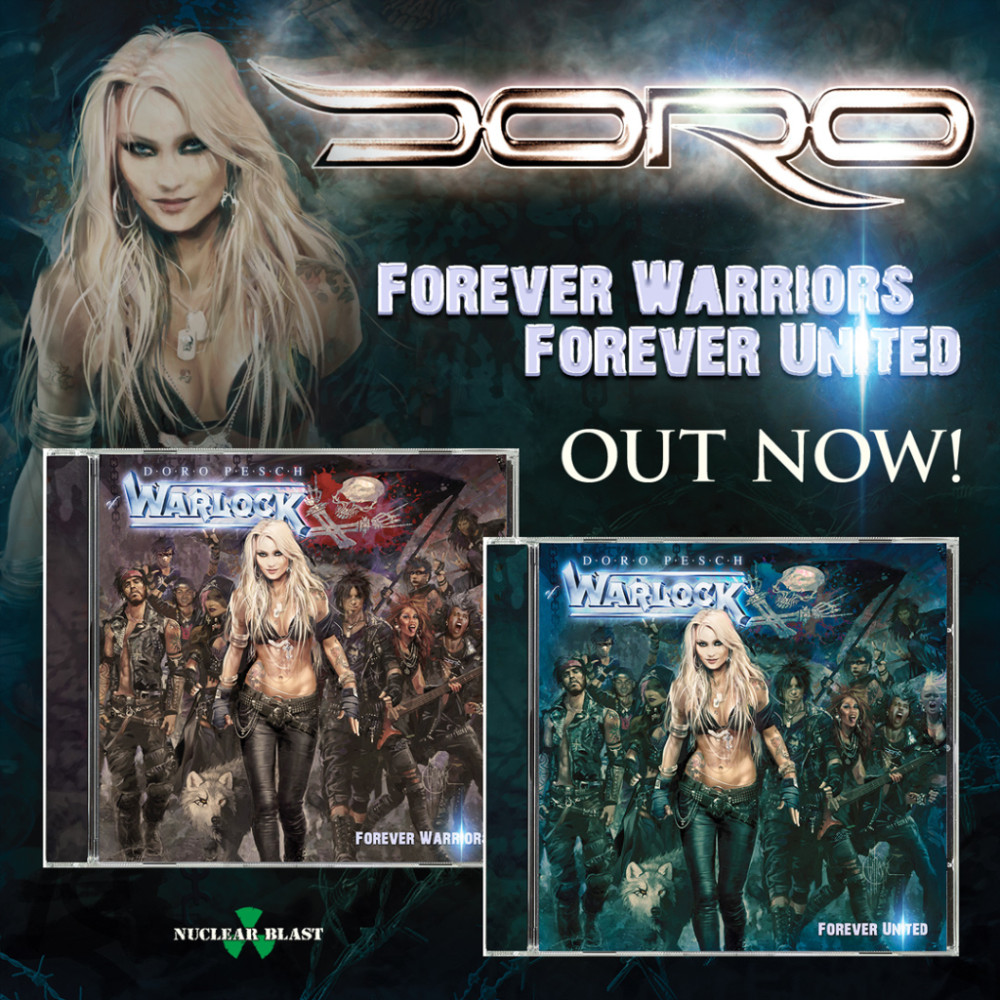 Metal queen DORO released her first ever double album, Forever Warriors // Forever United, on August 17, 2018 through Nuclear Blast Records. Now, thanks to the immense support from her loyal fans, DORO can proudly announce that these 2 records have achieved many chart entries all over the globe. The German chart position #4, is the highest ever entry in her home country. The full list reads as follows:

This is DORO‘s 20th album – and it arrived just in time for her 35th live stage anniversary! And yet it’s not just these two great anniversaries that make Forever Warriors // Forever United a truly extraordinary album. It’s also not just the fact that the metal queen is releasing her very first double album.

No, Forever Warriors // Forever United is so special because DORO presents 25 brand new hot tracks that all have one thing in common; an incredible variety and stylistic range, paired with the highest quality. There is simply no weak song on this album – it’s “all killer, no filler!”

On Forever Warriors // Forever United, DORO delivers a musical firecracker with an unbelievable amount of hits. From stadium anthems to ballads, from heavy metal to classical – the queen of rock and metal proves beyond doubt on this double album that she rules all facets within the rock genre (and far beyond)! And Forever Warriors // Forever United is also more than just a double album – it’s actually two new DORO albums in one!

On Forever Warriors, DORO presents herself as a wild warrior. Listen to the tracks “Bastardos,” “Blood,” “Sweat And Rock’n’Roll,” the first single “All For Metal” as well as “If I Can’t Have You – No One Will,” the duet with AMON AMARTH bellower Johan Hegg. This song contains brute force that will hit you right in the face. You have never heard DORO like this before!

Forever United captivates with the emotional side of DORO, which of course focuses on topics such as friendship, love and deep connections. Examples are the Lemmy anthem “Living Life To The Fullest,” “Heartbroken,” “Lift Me Up” and the brand new single ‘It Cuts So Deep,” with which DORO has succeeded in producing even more great songs!

“We have toured very intensively over the past few years, gathering so many impressions along the way and meeting so many great people. That really inspired me,” explains DORO. “The songs and ideas literally flooded our minds and this also didn’t stop in the studio. From over 50 song ideas we quickly had 14 songs for an album, then suddenly 20 and in the end it was 24. Then I decided to also record one more in our last studio week: ‘Caruso’.”

Consequently, DORO presents their fans with Forever Warriors // Forever United two new albums in a double package – with 19 regular tracks and six bonus songs that are full of great surprises.

The kick-off to this unique songwriting marathon was the track ‘Living Life To The Fullest’ in January 2016. DORO: “I was on the plane on my way to Lemmy‘s funeral, when the melody and the lyrics came to my mind. Lemmy was always incredibly important to me. Then it just went on always with the same procedure; as soon as a song idea came to maturity, I went into the studio – between all the gigs and tours – to capture the fresh wind and live energy of the songs.”

The album includes the MOTÖRHEAD cover ‘Lost In The Ozone’, in honor of Lemmy, as well as ‘Don’t Break My Heart Again’, an outstanding cover version of the WHITESNAKE hit. DORO: “I have a very deep personal connection to ‘Lost in The Ozone’ and WHITESNAKE have always been one of my absolute favorites. That’s also why my first ever band was called SNAKEBITE!”

A hymn like “All We Are,” a German ballad like “Für Immer” and a former WARLOCK guitarist… with Forever Warriors, Forever United, DORO has a new mega album under her belt which shows the rock queen in all of her countless, wonderful, varied facets. This album is another milestone in DORO‘s great career.