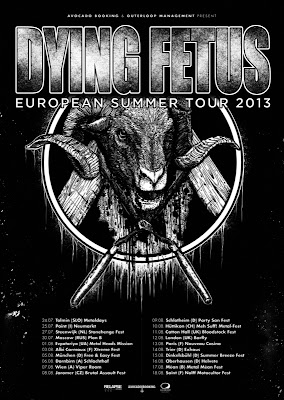 Death Metal powerhouse DYING FETUS have confirmed that they will be heading back to Europe this summer on a headlining tour.  The tour begins July 24th in Slovenia and runs through August 18th in France.  The tour includes appearances at numerous festivals including Brutal Assault, Party San, Bloodstock, Summer Breeze and many more. A complete list of dates can be found below.

Last week the band confirmed a string of Canadian tour dates for later this summer.  This run also includes select dates in the US.  A full North American headline tour will be announced shortly.  The tour is set to kick off August 23rd in Clifton Park, NY and will run through September 3rd in Providence, RI.

DYING FETUS released their latest album Reign Supreme in 2012 on Relapse Records.  The album is streaming in its entirety on their Bandcamp Page.

A video for the song “Second Skin” is available for viewing HERE.

Reign Supreme is available for purchase from the Relapse store HERE and digitally on iTunes.

For updates on DYING FETUS visit their Facebook page.