The following was announced today from MDA:

One of the world’s greatest humanitarians of all time, Jerry Lewis has announced he’s retiring as host of the annual Muscular Dystrophy Association Labor Day Telethon.  “As a labor of love, I’ve hosted the annual Telethon since 1966, and I’ll be making my final appearance on the show this year by performing my signature song, ‘You’ll Never Walk Alone’.  I’ll continue to serve MDA as its National Chairman – as I’ve done since the early 1950’s.  I’ll never desert MDA and my kids.”

Having banked some 900 hours of live television time encouraging America to help fuel worldwide research seeking treatments and cures for muscular dystrophy, ALS and related diseases, while simultaneously enabling MDA to provide unparalleled medical and health care services through its national network of some 200 hospital-affiliated clinics, Lewis today confirmed,  “It’s time for an all new Telethon era. This year’s six hour prime-time Telethon on September 4 will be spectacular, and I’m thrilled to be part of it.  We’re so close to treatments that it’s absolutely vital for everyone to tune in and make a generous donation.  America has always found a way each year to give me that just one dollar more to help my kids.”

MDA President & CEO Gerald C. Weinberg said, “As MDA continues the growth Jerry Lewis has done so much to inspire, all of us who’ve been privileged to work beside him, and the hundreds of thousands throughout the world affected by the myriad of muscle diseases MDA battles, will acknowledge in our hearts forever the unrivaled role Jerry has played in our lives and the lives of all Americans.  We’re deeply honored that Jerry Lewis will continue as MDA’s National Chairman and we’re profoundly grateful for everything he has done and is doing for the Association.”

As an individual who has been part of the MDA Telethon, both on and off camera, I knew this day would come yet tried to forget it’s inevitability.  I want to thank Jerry for everything he’s done for the Telethon and the show will not be the same. 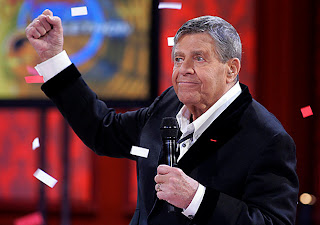 Avant-garde black metal outfit LICE, which features members of SHINING and TEITANBLOOD, are have released the second single from their upcoming album, Woe Betide You, which is set for release on May 10. “Roadkill” can be heard HERE. Woe Betide You can be pre-ordered HERE. The cover artwork for Woe Betide You, created by Timo Ketola. […]

Frontiers Music Srl is excited to announce the release of WITHEM‘s new album, entitled “The Unforgiving Road” on June 3rd. WITHEM is an upcoming Progressive Metal band hailing from Norway who are inspired by the likes of Symphony X, Pagan’s Mind, Dream Theater and Circus Maximus, concentrating heavily on melodic, memorable hooks, but still with […]

Gifted Singer/Songwriter Ryan Quinn from The Voice Season 10, has released a video of his stirring rendition of the Temple of the Dog hit single “Say Hello to Heaven” in homage to the late Chris Cornell. Shot, recorded and edited by Frank Briggs in North Hollywood, CA, each layer of Quinn’s stunning tribute was a complete take, including vocals, with no pitch correction […]