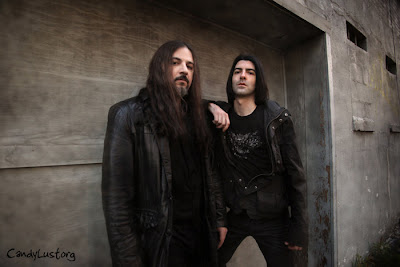 A PALE HORSE NAMED DEATH, have confirmed a late spring 2013 release for the follow up to their critically acclaimed debut And Hell Will Follow Me via SPV Records. The band has once again commissioned famed artist Sam Shearon AKA Mister-Sam (Rob Zombie, Fear Factory, Rammstein) to create the artwork for the as yet untitled album.

Frontman Sal Abruscato gave an update on the album:

“The sound has evolved and become a bit more orchestrated.   More harmony work has been done on this album, including new elements such as a Hammond B3 organ and piano. To me the album has an even darker sound and feel than the first one.” He continued, “The new album is a natural progression in song writing and vocals yet keeping continuity with the first album musically and artistically. Fans of our first album will find all the traits they love melded with even bigger production and mastering. Ted Jensen of Sterling Sound will be mastering the album.”

More information will be released in the coming weeks.

Metal Blade Records is proud to welcome Dvne to its worldwide roster! Founded in 2013, Dvne is a 5-piece progressive rock/metal band from Edinburgh, Scotland. With highly dynamic compositions venturing from delicate and intricate melodies to crushing and brutal soundscapes, Dvne‘s music takes its listeners through a deeply emotional journey filled with dystopian thematics, grand narrative, and other-worldly landscapes. Fans […]

If you’re a fan of dark, existential indie rock like The National and CHVRCHES, then you may have just found your next favorite band. The Portland-based, synth-driven indie rock group White Knife Study has debuted their new single and music video “Ghosts.” The quintet, who borrow their name from a winning hand in the board […]