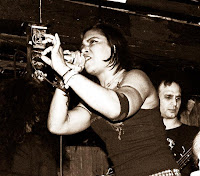 Everyone thinks that the rock and metal community doesn’t care about anyone or each other.  Truth is we are the most caring group of people you could ever meet and it’s time to rally together for one of our own.  Jessica “The Crusher” Pimentel, singer for New York’s thrash metal band Alekhine’s Gun, has come upon some hard times after a serious medical scare.  The following is a statement from her:

At the beginning of March I had a sore throat.

By March 9th It seemed to be strep. I got it checked out on the 12th and sure enough they thought the same. But my doctors were wrong. The next two weeks I suffered the most intense pain I have ever felt in my life. Several times my throat closed up to the point where I couldn’t breathe, swallow, lay down or turn my head. I was in and out of doctors offices, and the ER almost every day for 2 weeks.

After several diagnoses, 2 CAT scans, many many tests, pills, shots, poking, prodding, bleeding, two failed procedures with medieval looking instruments and one successful 20+ minute attack with a scalpel later we managed to find an abscess lodged in my throat and removed 250+ ML (about half a pint) of…. well…. really bad stuff that was hanging out in my neck. all this was done while I was WIDE awake on topical anesthesia while I was in charge of not allowing myself to choke, move or scream. The doctor was amazed at how bad it actually was and the big discrepancy between tests and reality. He broke for a second, lowered his voice so my mom wouldn’t hear and said..”I’ve never seen anything like this. You know you could’ve died at any point in these past 2 weeks”. Believe me, I already knew this….

I am finally feeling much better and one’s health is most important of all things but, now I have another problem. During the past month I have collected a HUGE amount of debt. I am still not “out of the woods” yet, so to speak, as I have 2 more follow up visits to make sure we got out everything that needed to be taken out and visits to specialist are also quite costly. This ordeal has caused me to miss work, wipe out my bank account on things that are not covered by insurance and fall behind on rent and all of my everyday bills as well.

A conservative guess (I’m talking BARE BONES HERE) of what I have racked up this week alone is about $8,000 dollars, $1,100 of which has been paid out of pocket so far. (That number may change when the rest of the bills come in). Then figure in rent and bills for another $2,000 and… you have a real problem.

So… In a very UN Jessica-like move, I am asking for help.
In situations like these anything and everything counts and can help and I thank all of those who checked up on me constantly and consistently through out this terrible time with phone calls, texts and visits even though I hadn’t seen some of you in years, or you were hundreds or thousands of miles away, and the select few special people who offered and actually DID help me in COUNTLESS ways— you are on my special superhero list. I don’t know how I could ever repay you.

On a side note. Slayer’s song “Angel of Death” now has new meaning for me… especially the line “Surgery, with no anesthesia”. Now I know how bad that is. But as much as I suffered it pains me more to know that there are people out there who are suffering even more than this right now…. This was a valuable lesson.

I ask that all you rockers and metalheads click here to help her out. THE CROWN REMNANT Reveal Drum Playthrough for “Into The Depths”