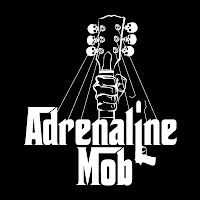 In recent years there have been bands that have been formed from bands breaking up or just wanting to try a side project with friends.  These projects often get lumped together until the title of SuperGroup and usually just do one album and call it a day.  But there are always exceptions to the rule, Adrenaline Mob being one of those exceptions.

In June of 2011 was when Mike Portnoy (ex-Dream Theater) first introduced the rock and metal world to his latest project called Adrenaline Mob; which also includes Russell Allen (Symphony X) on vocals, Mike Orlando on guitar and newly added John Moyer (Disturbed) on bass.  The debut self titled EP released in 2011 [which featured Paul DiLeo (Fozzy) on bass and rhythm guitarist Rich Ward (Stuck Mojo/Fozzy)] was just a taste of what was to come.  Their cover of Black Sabbath’s “The Mob Rules” became a huge hit through YouTube and left us hungry for more.

This week Adrenaline Mob released their first full length album Omerta.  Luckily for those of you that missed out on their self titled EP, all the songs from the EP were tweaked a bit and included on Omerta; except for their cover of “The Mob Rules”.  Omerta is one of the most intense albums I’ve heard so far this year.  And to be honest I wouldn’t expect less from a band of this caliber.

You can normally take an album and pick out the tracks that are less likely to be favorites and chalk it up to something on the track just not working right, but that is not the case for Omerta.  Each track sounds as if the guys have been playing together as a band for years as opposed to being a new band.  Each member bringing their A game to the table.  Russell Allen’s vocals are strong and have the full emotion you’d expect to hear from someone who believes whole-heartedly in the music.  Mike Portnoy needs no explanation if your familiar with his work, he brings the intensity many of us knew he could bring to music this heavy.  The real surprise is the amazing riffs from Mike Orlando.  Though he’s been doing his thing for some time now with his project Sonic Stomp, he’s be relatively unknown.  Well unknown no more, the riffs and solos spread throughout Omerta will make everyone sit up and take notice.

On a personal note, when I can wake up in the morning and hear a song playing in my head without my stereo or television being on usually means the album will be big.  Over the weekend “Undaunted” was in my head when I woke up after only hearing it once.  So if your looking for some hard hitting tunes then go get Adrenaline Mob’s Omerta and get your adrenaline pumping. 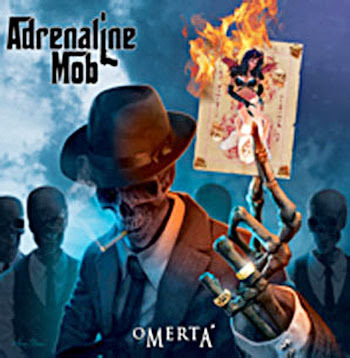 Rockers you know I’m not big on top number related lists but let’s have some fun. This week Eddie Trunk did a Top 20 Songs list for Kiss on his SiriusXM show Trunk Nation on Volumes. I’ve decided to join the fun and if you don’t follow me on Twitter here is MY Top 20 Kiss songs: 1. God […]

When bands start they dream of having a large catalog of music. The problem usually comes with what type of catalog their fans eventually want. Some crave continuity of a sound that the band created in its early days while others like seeing bands evolve their sound over time. Few want both and even fewer […]

This year has already been an amazing year for rock and metal music fans. So when we got the word that Accept would be releasing a new album this year it was a nice extra piece added to an already rockin year of tunes. Their latest album Blind Rage, third album with Mark Tornillo on […]