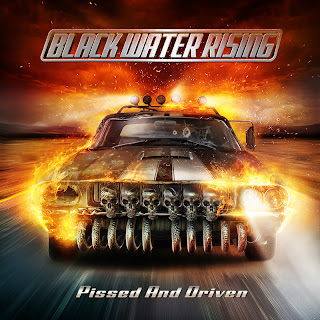 BLACK WATER RISING is back with the follow up to their critically acclaimed self-titled debut.  Today the band has confirmed a July 30th release date through Metalville/E1 for their sophomore album Pissed and Driven.  The band has also unveiled the cover art and tracklisting for the album.  The album art was created by Jan Yrlund of Darkgrove Design (Manowar, TYR).

“We are really psyched to get this new album out to our fans. They’ve been waiting a while for the follow-up to our debut and I don’t think they’ll be disappointed. The title says it all and it’s reflected in the energy and aggression of the cover art and music. We’re ready to take this to the next level!”

The first single from Pissed and Driven “Show No Mercy” was #5 most added on the CMJ Loud Rock Chart, already top 10 at many college radio stations and in heavy rotation at Nationally Syndicated Cable channel Music Choice sitting at #6 on their Metal Chart this week.  The song can be streamed HERE and is available for purchase on iTunes.

BLACK WATER RISING was formed from the ashes of various national touring acts. After releasing two self produced albums nationwide with a band called Dust To Dust, singer songwriter Rob Traynor locked himself away in his Brooklyn, New York recording studio, later emerging with a collection of songs that would become the seeds of BLACK WATER RISING.

Invigorated and eager to capitalize on the success of their debut album, the band’s new material promises to be riff heavy and proudly anchored in the foundations of traditional hard rock and metal song writing with hooks and catchy choruses to pull you in and leave you wanting more.

Pissed and Driven Tracklisting:
1. Show No Mercy
2. Last Man Standing
3. Pissed And Driven
4. Dance With The Devil
5. Along For The Ride
6. Fire It Up
7. All Gone
8. The Allure Of Self Destruction
9. Broken Man
10. We Are The Authority SONS OF TEXAS Return with New EP “Resurgence” on November 11