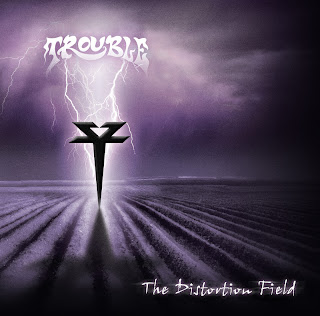 Chicago metal legends TROUBLE returned with their first album since ‘Simple Mind Condition’, released in 2007.  The album entitled The Distortion Field features 13 tracks and is available now on FRW Records in North America and in Europe on July 26th, 2013.
With their return album TROUBLE cracked two of Billboard’s Charts this week.  The album came in at #125 on the Top Independent Albums Chart, and # 25 on the Top New Artist Albums Chart (Heatseekers) which lists the best-selling albums by new and developing artists, defined as those who have never appeared in the Top 100 of The Billboard 200.
Guitarist Rick Wartell could not be happier with the reception of the new album:
“It’s an honor to receive the positive feedback, reviews and recognition. We’re extremely grateful to our fans and everyone who supported us during the making of The Distortion Field.”
The Distortion Field can be ordered on Amazon and iTunes.
Decibel Magazine’s “Deciblog” is streaming the songs “When The Sky Comes Down”, “Sucker” and “Butterflies” HERE.
The Distortion Field makes history in the TROUBLE camp through the band’s acquisition of a new lead vocalist, Kyle Thomas of Exorder and Floodgate fame.
Commenting on new vocalist Thomas, TROUBLE founder and guitarist Rick Wartell says, “Kyle is one of the most impressive singers I’ve ever heard, and by far the most extraodinary singer I’ve ever had the pleasure of working with.  He’s got incredible range, incredible power, and an incredible knowledge of TROUBLE, as he’s been a fan for 20-something years. We’ve known him forever, and he innately understands what TROUBLE is about.  He’s like the perfect guy to come in and do this job. It’s awesome.”
Veteran Music Producer Bill Metoyer is once again lending his expertise, having previously worked with the band on ‘The Skull’ and ‘Trouble’, both Metal Blade releases.
The band consists of Kyle Thomas – vocals, Rick Wartell – guitar, Bruce Franklin – guitars, and Mark “Marko” Lira – drums.
Visit the band’s website www.newtrouble.com for updates.
Turbo

THE BLACK DAHLIA MURDER will hit the tour trail again next month as direct support to Black Label Society. The North American journey, which includes a glut of THE BLACK DAHLIA MURDER one-off headlining dates prior to and during its duration, will officially commence on September 11th in Ventura, California and run through October 13th in Jacksonville, […]