We’re about to go back underground so we can prepare to celebrate our 10 year anniversary all year long in 2010 that will include but is not limited to: new songs, new shirts, our first ever DVD release with both multi-camera live footage and a documentary and videos, our first ever national tour, and a bunch of other surprises we can’t even tell you about.

But before we do that, we wanted to say goodbye for a while to all of our friends and fans who have been so supportive this year. And what better place to do that, than our favorite friendly down to earth rock and roll biker club in the valley, Paladino’s. Those that have been coming to see us over the years have said that their favorite Dame Fortune shows have been a Paladino’s, and yet it’s been 3 years since we’ve played there. So come rock with us on Saturday September 19th at 8:30pm
at Paladino’s where the heart of rock and roll still beats strong. Call us at 213-840-3333 for 10 buck tickets and we’ll make it a night to remember!

Here’s what the rest of the line up looks like for the night:

7:30 Forceps: a cover band that does Rage Against the Machine, NIN and The Deftones etc.
8:30 Dame Fortune: yours truly
9:30 Clandestine: Evanescence meets Rush with a hot female Asian singer
10:30 The Fold: a groove oriented thrash metal band along the lines of Pantera
11:30 The Saloonatics: fresh from playing for the troops in Iraq with covers of Van Halen, Areosmith, Metallica and Journey 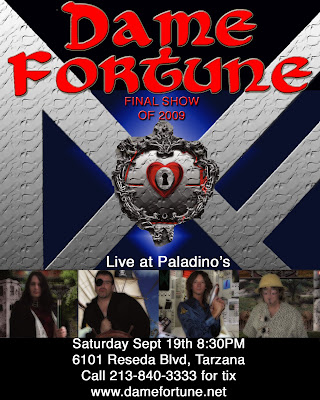 P.S. Lots going on in our world. Happy to announce that our music for “The Days Are Just Packed” was recently used in New York for the
Jerry Lewis telethon as the musical accompaniment to a video cut together by our buddy Turbo. John Merritt was recently featured in an
article in the Tri-County Times talking about the hometown connection to his song “Holly Fenton,” There’s an article about us in the new issue
of the British Rock mag Fireworks #37, and we had our first religious protest against us. Look for more details about all that & more in a major site
update coming soon!

MONTFAUCON – the medieval era-inspired doom/death metal concept project from Uzbekestani duo Valentin Mayamsin and Michel Cadenzar – will release their six-track album, Renaissance, on February 17, 2017. Pre-orders are available via Bandcamp, where you can also stream their new track “Prisoner”.   In anticipation of the album’s release, MONTFAUCON have revealed another new track, […]

Two of progressive metal’s most influential bands will join forces for the “Transcending the Coma Tour” this fall: Between the Buried and Me and Devin Townsend Project have plotted a co-headlining run, with Fallujah as support! Tickets will be on sale on Friday, May 20th at 10:00am local time online or through local venue ticket outlets; […]