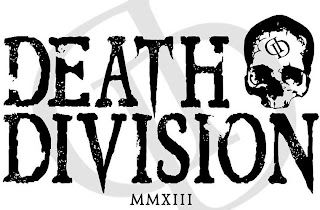 I’m on the verge if what will be 4 years of being a DJ and during that time if heard bands that have come and gone while others I didn’t get a chance to hear but blown up big resulting in me feeling dumb about missing them at their start. Then there are the bands that I hear and sense big things for, Death Division is that kind of band.

I first heard about Death Division from my friend and fellow DJ RadioJ, saying there was something about them. Then I got a song from them and was working on setting up an interview with their front man Sean de la Tour (click here to listen to that interview) when it was announced they’d be part of this years Gigantour.

Since that interview things have continued to go well for Death Division. Playing on Gigantour and releasing their debut EP “mmxiii” (click here to buy it on iTunes) to great reviews.

The bands line up of Sean de la Tour on Vocals & Guitar,  Rick DiMarco on Guitar, Jerry Montano (Hellyeah) on Bass, and Tim Yeung (Nile, Morbid Angel, Hate Eternal) on drums work together as if they’ve been playing together for years. Listening to their debut EP makes you forget that its a debut. The song “We Are The Fallen” is a great track that brings the fans and band together with its message of how no matter how often you are knocked down you just gotta keep going and keep fighting. Plus a song like “I’ve Had Enough” is something we’ve all said and been through in our lives so its another easily identifiable song between band and fans.

Death Division has recently left Gigantour to head back to LA to start pre-production on a full length album to be released in 2014. I am anxiously awaiting that as I can tell from just the EP that this is the beginning for them. If you saw them on Gigantour you know this, if you haven’t pick up their EP “mmxiii” on iTunes and hear what we’ve heard. 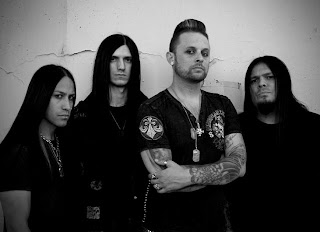 It was about a year ago that I first heard about Shattered Sun. I received a demo and was asked if I’d be interested in interviewing their singer Marcos Leal, which I did. The demo I heard peaked my interest as a dose of pure metal and my conversation with Marcos showed that he and […]

This past weekend my official concert year began and it’s looking to be a long one. With AC/DC, Rob Zombie, and Mayhem Festival to just name a few that are already on my schedule I knew that seeing Killcode and Adrenaline Mob together at Revolution in Amityville was the perfect start. It’s been a while […]

Album Review: ANTHRAX Still Reigns With For All Kings

Back in 2011 it was only three days difference between Anthrax hitting us with Worship Music and The Big 4 at Yankee Stadium. I distinctly remember running to buy the album to be fully prepared for the show but never expected that album the live longer in my memory than the overall showcase of metal […]