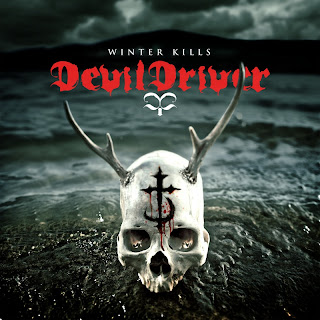 DEVILDRIVER have confirmed that the title of their new album is Winter Kills.  The album will be released worldwide on August 27th.  The band recorded the album in Florida at Audio Hammer Studios and vocals in Los Angeles, CA at Dez’s home studio with Mark Lewis (Black Dahlia Murder, Whitechapel, All That Remains) handling production duties.

The artwork for Winter Kills features a photograph by Dean Karr.  The layout was done by Ryan Clark/Invisible Creature.

DEVILDRIVER has worked with Lewis previously on “Beast” and “The Last Kind Words” and producer Mark Lewis’s prolific leadership of the new school of metal has yet again helped DEVILDRIVER deliver another Epic heavy Metal record.  This record melds what the band does best. In your face power as well as the California Groove sound the band pioneered.

DEVILDRIVER has always been a band on a three-pronged mission: Work hard, rock harder, and kick as many asses as possible in the process. The band tours forever and has since its beginnings. Their live performances and circle pits are as legendary as their music.

“This is by far DEVILDRIVER’s most cohesive, powerful, groove laden record to date! We delivered our signature California Groove sound alongside a Raw and Biting guitar tone, mixed it with massive hooks, added in thunderous drums to rethink, and reshape another different sounding unique piece of Rock-N-Roll! Cutting our own path is something to be proud of. DEVILDRIVER has always and will forever be about thinking outside the box and delivering on something different from record to record, we cannot be assimilated into any scene or even genre of Metal and we will continue to do things our own way with a massive middle finger in the air to the status quo!”

The band will be hitting the road worldwide in support of Winter Kills.  Touring as always will be a focal point for the band. The US can expect to see them this fall and winter with Europe and the rest of the globe coming in 2014 and beyond. Additional information on Winter Kills will be made available shortly.

Today, AntropomorphiA has released their latest collection of gospels of the obscene: Sermon ov Wrath. To celebrate the album’s release, the band has now launched a video for the track “Murmur Ov The Dead”! Produced and edited my Maurice Swinkels (Legion Of The Damned), the clip can be viewed at: Singer/guitarist Ferry Damen comments: “With […]

THE WOUNDED KINGS To Release New Album Visions In Bone

THE WOUNDED KINGS, doom metal warriors from the South West of England, are due to release their fifth full-length album, Visions In Bone, on August 26th via Candlelight / Spinefarm Records.   Visions In Bone was jointly produced and engineered by Chris Fielding and the band at Mwnci Studios in Wales and Skyhammer Studios in […]