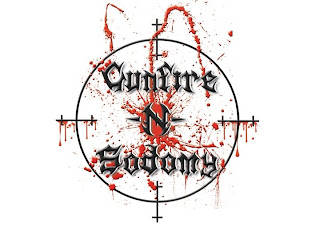 Being around the music industry when a new sound comes along is a rare thing to time. Most of us come in long after a sound is introduced and grow the appreciate it as we discover its roots. Luckily I and several others are right at the starting line for the birth of what’s being called “acoustic snuff core” and I have referenced as “acoustic death metal”. And the band bringing you this new sound is Gunfire-N-Sodomy.

I was first told about Gunfire-N-Sodomy by Don Jamieson (That Metal Show) and Jim DeMaria (Generation Kill) about a year ago during phone interviews.  As they both explained what Gunfire-N-Sodomy at desperate times I was having trouble wrapping my head around the idea of aggressive death metal style vocals and drums with an acoustic guitar. It sounded too unusual to work. But Jim convinced me to come check it out live.

It was July 2012 that I first saw Gunfire-N-Sodomy at St Vitus Bar in Brooklyn and when I began inquiring about the band I felt like I was in the 70s inquiring about KISS when they started.  No real names, identities hidden behind masks, and anyone who knows the band sticking to that story.  You have Filth and Mule on vocals, Slit on guitar, and Germ on drums.  I remember watching them set up and staring at Slit with his acoustic guitar and thinking there is no way in the world this is going to work. Boy was I wrong in every sense of the word.

While I cannot remember the setlist from that show what I do remember is being absolutely blown away by what I saw. Growling and somewhat violent lyrics perfectly in sync with an acoustic guitar and pounding drums. I couldn’t believe it hadn’t been done before only because of how well it all worked together. And while the use of fake blood, toothpaste (I think and hope), and female mannequin heads caught me off guard, they still worked.

The best thing is it’s working in a big way as they now how their self titled EP available now on iTunes. It may only be a brief 5 song introduction, it’s the perfect introduction to what they do for those outside the NY/NJ area that haven’t discovered them on YouTube yet.  The one aspect that you get immediately on the EP is how Slit’s ability on the guitar makes you forget it’s an acoustic guitar. He gets amazing sound and speed out of an instrument that many of us in the world of rock and metal have come to know as something used in unplugged sets or ballads. It’s kind of refreshing to hear the instrument that essentially began it all used in along side the powerful drumming of Germ. And there’s double emphasis on his drumming from the opening track Killing Disease all the way through the final track Gunfire-N-Sodomy because without a bass player it’s on him to keep the whole band together. Don’t count out Filth or Mule either cause the flow back and forth on vocals without competing against each other for dominance.  That is something you don’t see in bands with two singers and very worth noting.

One other thing to note, it least from a media angle, is both Don Jamieson and Jim DeMaria have been seen at Gunfire-N-Sodomy shows but no one will deny or confirm if they are or are not members of the band.

But that is a mute point because the Gunfire-N-Sodomy EP is now listed as a bestseller on the iTunes Metal Bestsellers list. So I urge you to go get your copy of it now and become a fan of theirs, or Sodomite as they refer to their fan base, now because Gunfire-N-Sodomy has fired the first of what I’m sure will be many shots into the music world with their unique new sound.

Periphery Gives Their Fans A Juggernaut