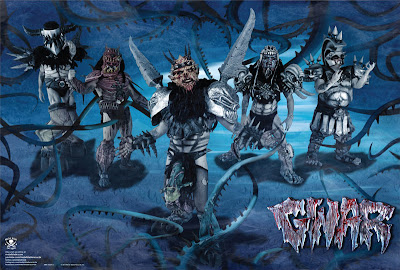 Antarctic rock gods GWAR are set to return to the realms of man and reclaim their vice-like grip on the throat of hard-rock humanity after spending the last year-and-a-half working on their follow-up to 2011’s critically acclaimed Bloody Pit of Horror. The new recording, Battle Maximus is GWAR‘s first full-length studio effort since the loss of their longtime guitar player, Flattus Maximus, and is set to hit the streets on September 17th on Metal Blade Records. Check out the first track, “Madness at the Core of Time” and pre-order Battle Maximus HERE.
“This album is both a tribute to Flattus and a telling of the next chapter in the story of GWAR,” said warty front-thing Oderus Urungus. “The combo of the brand new album and show should satisfy even the most hardcore Flattus devotee with the fact that GWAR‘s slay-skills are as supreme as ever, and the band stands poised to embark on our most earth-shattering world tour yet. We have mourned, we have honored, and now it’s time to fucking DEVASTATE in the name of Flattus and the supreme entity that is GWAR.”
Oderus continued…”This is our first record in our brand-new Slave Pit Studios, which Flattus had a lead role in designing, but without him we had no one left to twiddle the buttons, much less play the blazing metal leads and provide the musical direction that rescued GWAR from the depths of clown-band obscurity. I mean, Balsac is no slouch, but Flattus’ departure left a huge hole in our band. We had no choice. We had to blow the Horn of Hate…”
The Horn of Hate is an ancient Slave Pit contraption that summons all the Scumdogs in the Universe in the unlikely event that one of them is killed in battle, disintegrated, or becomes a Mormon. As the cosmic tones echoed throughout the universe (which unfortunately sounds like a giant duck-fart), the Maximus tribe answered the call by traveling to Earth to wage the mighty “Battle Maximus”, a musical trial-by-combat for the right to follow in the footsteps of Flattus. When the dust had settled, but one Scumdog remained standing…the zit-encrusted and undeniably shred-tastic Pustulus Maximus.
“It is a highlight of my corpse-littered life to join my Scumdog brothers and continue the legendary legacy of the Maximus clan,” said new GWAR-tarist, Pustulus Maximus. “I am not so happy that Oderus vandalized my space-ship, effectively marooning me on Earth, but fuck it…it’s time to ROCK!”
GWAR‘s Battle Maximus features twelve brand new tracks that not only honor their departed ally, but tells the story of GWAR‘s latest struggle against what may be their greatest enemy yet…the insidious “Mr. Perfect”, who has travelled through time itself to steal the power of GWAR–the power of immortality, and use this power to mutate the human race into his twisted vision of what the “perfect” human should be. Once again GWAR finds themselves as the only thing standing between the human race and the latest super-powered shithead bent on the destruction of GWAR and the enslavement of their worshippers.
“If anyone is gonna destroy the human race, it’s gonna be us…so get ready for the most epic struggle yet. Battle Maximus is destined to further solidify GWAR‘s place as the masters of Earth and Man, and no time-travelling demonic despot is going to change that, even if we have to kick his ass in every venue from the most puke-smeared club to the most illustrious festival stages worldwide,” said Oderus. “The new show is going to feature Mr. Perfect eating his own ass nightly, as well as GWAR torturing the most annoying figures in the world of entertainment, politics, and religion. Prepare yourselves for the most awesome chapter in GWAR‘s blood-soaked history yet. Hail Flattus!”

Tracklisting for Battle Maximus
1) Intro
2) Madness at the Core of Time
3) Bloodbath
4) Nothing Left Alive
5) They Swallowed the Sun
6) Torture
7) Raped at Birth
8) I, Bonesnapper
9) Mr. Perfect
10) Battle Maximus
11) Triumph of the Pig Children
12) Falling
13) Fly Now
With the release date set for September 17th, the Slaves of GWAR are in a period of frantic activity as they prepare not only for the new album/show, but the 4th annual GWAR-B-Q, presented by Ring-Dog Rescue and Slave Pit Inc., and backed up by the fine folks at Brown Distributing. The event is slated to take place Saturday August 17th in Richmond, VA at Hadad’s Lake Water Park.  With acts like GWAR, Municipal Waste, Corrosion of Conformity, Pig Destroyer, and the re-union of the legendary X-Cops, this years’ bill is possibly the greatest yet assembled in the blood-spattered history of GWAR’s ever-expanding festival.  Additional events include the “B4-B-Q” and the “GWA-fter Party” and you can get all the info and ticketing information at http://www.gwarbq.com.  Check out the GWAR-B-Q commercial HERE.

But thats not all, as Oderus travels to Tampa, FLA to host the “Brutal GWAR B Q and Brew” Aug. 3rd @ Crowbar in Tampa FL. Oderus and Cigar City will be unveiling the new GWAR Beer in a huge party which features everything from a GWAR cover band to Oderus throwing up on your girlfriend.

And if that’s not enough, the band has also confirmed numerous festival appearances and even some co-headline tour dates with Hatebreed in support of Battle Maximus.  Stay tuned for the imminent announcement of a huge fall headline tour, featuring an absolutely killer line-up of top-notch support acts.

CYHRA “No Halos In Hell” Is Here

Today, modern melodic metallers CYHRA release their brand new album No Halos In Hell! Loaded with melodic vocal hooks and heavy yet dynamic guitars that stay nailed to the brain for days, this sophomore full-length release proves Jake E (ex-AMARANTHE), Jesper Strömblad (ex-IN FLAMES), Euge Valovirta (ex-SHINING) and Alex Landenburg (RHAPSODY) to be the perfect team for the creation of this year’s autumn soundtrack! To […]

“Due to contractual obligations, Toby Rand was unfortunately unable to continue with The Fell. We wish him all the best for the future! However, we are thrilled to announce our new front-man, Anthony De La Torre. Anthony is an amazing vocalist who you may also know as Young Jack Sparrow in Pirates of the Caribbean: […]