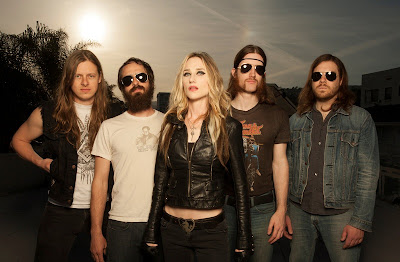 HUNTRESS has generated a massive amount of buzz since the release of their debut album Spell Eater in 2012. The follow up to last year’s kill is Starbound Beast, to be released on July 2nd during the band’s run with the Rockstar Energy Drink Mayhem Festival. Huntress is about to embark on the biggest tour opportunity of their new career, as well as the most demanding and expensive. HUNTRESS has teamed up with fellow Mayhem brothers Battlecross to share the cost for a bus this summer, since their tour vans can’t handle the extreme heat. And that is only the beginning of the financial strain for a young metal band with minimal tour support.

HUNTRESS has started an indiegogo (Virtual Yard Sale) campaign to ensure their participation in the festival. Check out their indiegogo page HERE, featuring enticing packages and unique collector items. Some of the perks offered are signed CD DigiPaks and Vinyl of their upcoming album Starbound Beast, and packages that feature tickets to Mayhem Festival plus hang outs with the band. Water balloon fights, parking lot BBQs and Astrological readings with Jill Janus are also offered up for sacrifice. Some of the most exclusive perks include the sword prop and red cloak from the “Eight of Swords” video, and Blake’s 1979 Custom GMC Vandura. More items and unique opportunities will be added as well.

In more HUNTRESS related Mayhem news, vocalist Jill Janus will host the first ever Shred-Meister guitar competition.  Festival attendees can go to the Jägermeister tents on site and audition for a chance to shred for 10 seconds on the main stage. Each day, one of the 10 finalists will win a custom Jägermeister guitar from Schecter and the overall winner at the end of the tour will win a custom Jägermeister full stack and head courtesy of Peavey Electronics.

Starbound Beast will be released on June 28th in Europe and on July 2nd in North America via Napalm Records.  The band recorded the album at Hobby Shop Studios in Los Angeles, CA, working with famed producer Zeuss (Shadows Fall, Hatebreed, Agnostic Front).  The artwork for Starbound Beast was created once again by Vance Kelly (Slayer, Ghost B.C., Mastodon).

HUNTRESS has just revealed the first song off the new record titled “I Want to Fuck You to Death”, co-written by Lemmy Kilmister of Motorhead. To hear the streaming version now, check out the HUNTRESS Facebook Page.  Click the “LIKE US TO DEATH” tab or visit this direct link: https://www.facebook.com/HuntressKills/app_469513749793564

HUNTRESS was spawned from the preternatural union of Jill Janus with underground metal bands Professor and Dark Black. They thrive on thundering drums, heavy riffs, spectral solos and catchy choruses that come from the band’s musical concoction of occult science and bong rips. HUNTRESS remains true to the roots of melodic heavy metal with a penchant for thrash, death and black metal.

DORO Inducted To The Hall Of Heavy Metal History

There’s only a few days left until the eagerly awaited new DORO double album Forever Warriors, Forever United is released! A few days ago, 75.000 enthusiastic fans celebrated DORO after their magnificent jubilee gig at a sold out Wacken Open Air. A few seconds later, still on stage, the festivities continued: DORO was officially inducted into the US HALL OF HEAVY METAL HISTORY and was honored with the award. […]

VENOM Inc interviewed by The Metal Voice, Talking “New Album and Satanic Troubles in the South”

For Canada’s The Metal Voice former singer of Anthrax Neil Turbin (Deathriders) caught up with VENOM Inc at the Whisky A Go Go in Los Angeles. When asked about plans for releasing new Venom Inc Album Mantas said: “Lots of songs are at the demo stage, it’s on its way. “ Abaddon continued,” The stuff […]