It’s been a little over a month now since KISS released their latest studio album “Sonic Boom” and it has been received very well in spite of the problems that came from their exclusive deal with Wal-Mart. I’ve waited this long to write my thoughts of “Sonic Boom” because as a huge KISS fan I wanted to digest every aspect of it’s release before sharing my thoughts. And the release is truly the best place to start considering how poorly it was handled.

Every KISS fan, and some non-fans, know that Gene Simmons is as much of a business man as he is a musician. So it was no surprise to anyone that he took a cue from Guns N Roses and AC/DC and struck a deal with a major chain for distribution. And seeing as how well AC/DC did through Wal-Mart with their release “Black Ice” it seemed that a KISS/Wal-Mart deal would work wonders; especially with the idea of the KISS Korner where you could get the new album plus other KISS merchandise. Unfortunately Wal-Mart dropped the ball and left many KISS fans upset as they got to their local Wal-Mart to find no KISS Korner at all in some stores and even having to go to more than one Wal-Mart to just find a copy of the new album let alone other KISS merchandise. Even Sebastian Bach, formerly of Skid Row, had said on his Twitter feed that he had gone to his Wal-Mart ready to buy every new piece of KISS merchandise only to leave with more money than merchandise. And the online store was no better. I pre-ordered the album a month before it’s release expecting the receive it the day of release only to have to wait because Wal-Mart didn’t ship until the release date. Lucky for KISS that the album wasn’t disappointing or they would have had a lot of issues to deal with.

Considering the last new KISS album was 11-years ago, there was a lot of speculation as to whether or not this album would be anything worth listening to. And the truth is that it is a typical KISS album from start to finish. There was no redeveloping or experimenting with “Sonic Boom” so if you know KISS’ music then you know what you are getting. And the packaging was setup to give to old fans and recuit new ones by adding a greatest hits CD and DVD of some live performances without costing an arm or a leg. 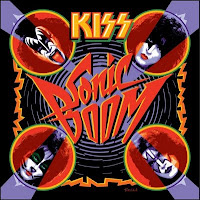 The opening track, Modern Day Delilah, was also the single for the album. This made perfect sense because it is very reminiscent of the early days of KISS. Almost like a newer version of the KISS Klassic Strutter. Though the vocals on it can get to you as Paul Stanley attempts to hit notes that are obviously out of his vocal range at his age. It’s the only time you have that on the album, every track has it’s connections to a different era of KISStory.

Danger Us reminds me so much of the mid to late 1980s KISS line-up that it makes me wonder if it was a newly written track or was it something that was passed on in the writing sessions back then. A strongly guitar driven track that has a very simple yet catchy chorus that gets stuck in your head. I’ve even found myself humming it at random and then searching it out on my iPhone to listen to it again. And then the album shifts to the early 1990s KISS with I’m An Animal, a slower and darker pace compared to the other songs. Much like the album “Carnival of Souls” does to the entire KISS library, it’s closer to metal than the classic rock sound that everyone knows and loves KISS for.

My only gripe is that Tommy Thayer and Eric Singer, who are replacing Ace Frehley and Peter Criss in this version of KISS, don’t really stand out to me on the album. If it wasn’t for the trademark 4-part harmonies and Eric’s vocals on the song All For The Glory or Tommy’s on the song When Lightning Strikes you would never know that they were on the album at all without reading the liner notes. I truthfully feel that Tommy stood out more on the “Alive IV: Symphony” more than this album. While the guitar solos are strong they sound more like a session guy trying to copy Ace Frehley’s style than Tommy contributing his own talent.

When it’s all said and done KISS didn’t really disappoint this member of the KISS Army with “Sonic Boom”. True that it took 11-years to get new material and it isn’t the original line-up, it is still the same sound that we come to expect from KISS and that makes it a hit in my books. Let’s just hope it fuels the flames of creativity and we don’t have to wait another 11-years for another one.