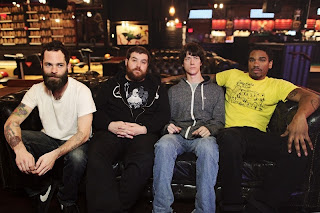 Fresh off an extensive North American tour with Clutch, D.C. groove rockers LIONIZE are preparing to head back into the studio to work on their next album.  The band has confirmed four dates for the summer months and will continue to play one-off shows while they work on the follow up to Superczar and the Vulture.  Dates are below.

Frontman Nate Bergman spoke about heading back into the studio and playing out this Summer:

“We just finished up a huge North American tour with Clutch, we are excited to get into our basement and work on a new batch of songs. Along with spending the summer writing we are doing some special headlining shows in DC, Delaware and Pittsburgh. We are going to be introducing a lot of new material at these shows and working out the material live. Each show will be a unique set list as always and some older tunes along with the newer stuff will be on the menu. We are looking forward to this summer of LIONIZE

For a band with so little pretense, sometimes it can be easy to forget just how much LIONIZE accomplished since their inception in 2004.  From being the first band to play both Bonnaroo and the Vans Warped Tour in the same year to their five full-length albums to virtually non-stop touring year after year, the groove-heavy rock group has dared to do more than most bands could ever hope to accomplish.

LAMB OF GOD is currently featured on the cover of Decibel Magazine‘s “Year In Metal” January 2016 issue (#135). The story behind VII: Sturm Und Drang and its release itself has grasped the attention of the metal community harder than any other subject in 2015. Read an all-encompassing interview in this issue, available for ordering […]

Debut Album Lucifer I Available June 16th on Rise Above Records  Berlin-based heavy metal blues rockers, LUCIFER, have today unveiled the video for their brand new single, “Izrael”.    The single was written by and ex-Cathedral guitarist, Garry Jennings and front woman Johanna Sadonis and is taken from their upcoming debut album, entitled Lucifer I. The video for the track […]

STEVE’N’SEAGULLS get their Iron Maiden on with their latest cover-a rousing, folked out version of Maiden’s “Run to the Hills.”   Watch it HERE!    The band’s new album Farm Machine is out now via Spinefarm. The release landed on the Bluegrass charts, not something you’d normally expect from an album full of metal covers […]