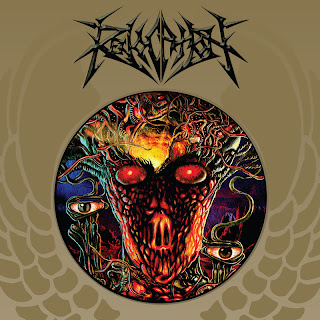 REVOCATION’s self-titled new album will be released in Europe on August 2nd, The UK August 5th and August 6th in North America via Relapse Records. This is their 4th full-length release and the first featuring new bassist Brett Bamberger. The artwork was created by Orion Landau (Dying Fetus, Obscura, Nile).

Today a trailer for the albums has been made available HERE.  The trailer features 30 seconds of new music.  Additionally, the album is now available for pre-order in exclusive bundle packages at The Relapse Records Online Store.  The album will be available in a deluxe CD, standard CD, 2xLP and Digital Formats.  The Deluxe CD and LP contain an exclusive bonus track, a cover of the Metallica classic “Dyers Eve”.

The first in-studio video focuses on the drums and bass and can be viewed HERE.  Additionally the clip features 10 seconds of new REVOCATION music.  The second video in the series focusing on the guitar and bass tracking and features 10 seconds of brand new REVOCATION material.  Check it out HERE.  The third video, which focuses on the recording of the vocals can be viewed HERE

REVOCATION will be taking part in this year’s Summer Slaughter Tour, alongside the likes of Dillenger Escape Plan, Cattle Decapitation and others.  The tour starts July 19th in San Francisco, CA and runs through August 20th in Portland, OR.  In addition to the Summer Slaughter dates, the band has announced a handful of headline shows leading up to the Summer Slaughter and immediately following the tour.  All dates are listed below.

REVOCATION is available for interviews upon request. To speak with the band, please contact the relevant publicity contact listed below. Updated REVOCATION news and tour information will be made available at the Relapse Records website, the REVOCATION Facebook page.

***THE SUMMER SLAUGHTER TOUR. All Dates from July 19 – Aug 16 with/ The Dillinger Escape Plan, Animals as Leaders, Periphery, Norma Jean, Cattle Decapitation, The Ocean, Revocation, Aeon, Rings of Saturn, Thy Art is Murder***

All Them Witches Release Live Album, At The Garage, on Feb. 10

All Them Witches, the Nashville band Native Magazine said “concoct a potent brew of dark, shrieking Delta blues that crackle with mystical psychedelic energy,” release the latest in an ongoing series of live albums with At The Garage, released independently on Feb. 10. “All Them Witches is a live band, and At The Garage record […]

DANKO JONES Shares A ‘FAN ONLY’ Single “FLAUNT IT”

Danko Jones are proud to share their new ‘fan-only’ single “Flaunt It”.

STEVE’N’SEAGULLS RETURN WITH BROTHERS IN FARMS

Viral Internet sensation STEVE’N’SEAGULLS are back. Their second album Brothers in Farms is due out September 9 via Spinefarm.   For the uninitiated, Finland’s S’N’S shot to fame thanks to their bluegrass covers of metal classics, which spread across the w-w-w and garnered fans all over the world and racked up millions of views.   […]