Most people hear about Pirates nowadays and the first thing people think of is Disney’s epic movie series “Pirates of the Caribbean” and the slowly building legendary status that it’s main character Captain Jack Sparrow has. And then you get visions of old battle beaten ships and men with long swords, beards, and smelling of rum and the sea. But dare I say that there is more metal to pirates than the gold they are constantly searching for? Oh yes, I dare say that there is such a thing as “Pirate Metal”.

The idea of pirate metal isn’t as far fetched as it might sound. When you watch the “Pirates of the Caribbean” movies part of what makes the movies intense is the music. I myself have contemplated several times about purchasing the soundtracks to the movies because the intensity of just the opening sequence in the first movie hinted at a taste of rock and/or metal. And how much difficulty could it be to add some lyrics and electric guitars to the simple flutes and strings that we familiarize with pirate music? Not that difficult for four guys out of Scotland didn’t think it was all that hard cause they have done just that.

I was on Twitter the other night and the name Alestorm came across my screen from someone and with pirate metal connected to it I was intrigued. With curiosity peaked I set sail to surf the web to find where these lads be found. And luckily they were an easy find thanks to Myspace and I truly couldn’t believe at first that it was legit, and then I checked out the songs they have setup on their profile and was impressed to the point of wanting my share of these mates. I thusly set sail towards iTunes and found them on there as well.

With limited funds I had to choose cautiously and so I went right for the mighty beast itself and purchased their Leviathan EP and waited for it to download before giving it a listen. 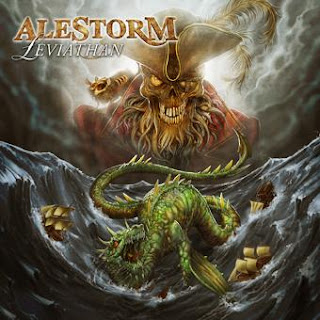 And once done I pressed play and began to be amazed at how the simplicity of what I knew as pirate music was loaded into cannons with guitars, keyboards and fitting vocals and then blasted at me full force.

The title tracks opening instrumentals just hits you with visuals of the high seas except instead of just your regular pirate ship of wood and cloth sails you need to add a few towers of amps to crank out tunes. You get visuals of the most intense sea battles that would make Disney curl up into the fetal position wondering what you did to their laughable pirates. Though in those battles you’d be using guitar solos as your weapon and in Alestorm‘s case your swordsman being Dani Evans who surely shreds with the best of them. His guitar work fits so perfectly that you’d think he’s from a long line of pirate musicians. His shredding is evenly matched by the keyboard, yes keyboard, solos of Christopher Bowes. He reminds you strongly that they keyboard is not just a trend of the 80’s but also belongs in the world of metal.

The lyrics tell a story for each song, and the simplest proof of this is on the last track on the Leviathan EP “Heavy Metal Pirates”. It simply tells you how they are pirates of the heavy metal variety. You can’t ask for much more then that from a song with that title. Each song telling it’s own story right up front. No hidden meaning, no symbolizing, just flat out lyrics about what the title says.

I will surely be joining the mighty crew of Alestorm and adding pirate metal to my vocabulary. And after all, aren’t all fans of music like pirates? Looking for through the world for new treasures of music and wearing shirts of those we like as uniforms, defending it to the death.

Watch Out Cause KILLCODE Is Loose