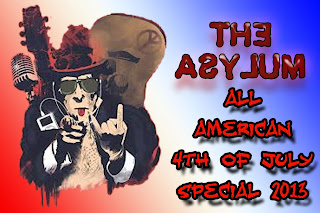 In honor of the 4th of July it was an all American playlist (click here for podcast):

Catch THE ASYLUM every Thursday LIVE from 10PM – 1AM EST onBullspikeRadio.com, Replay every Sunday from 9:30PM – 12:30AM EST on CNEU Radio, Replay every Tuesday from 9PM – Midnight EST on NUROQ FM Radio, and send your requests toTurbo@bullspikeradio.com.

THE ASYLUM Weekly Picks Catch Up

Here’s what was played this week on THE ASYLUM (click here for podcast): Livin’ On A Prayer by Bon Jovi Don’t Stop Believin’ by Journey Back for More by Ratt Ace Of Spades by Motörhead Master Of Puppets by Metallica Monkey by Brand of Julez She Likes Guns by Granny 4 Barrel Let Me Love You by […]