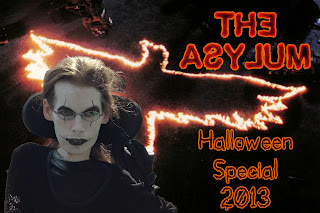 Because my voice tricked me and went out my treat to you was an ALL music show.  Here’s the playlist (click here for podcast):

Catch THE ASYLUM every Thursday LIVE from 10PM – 1AM EST onBullspikeRadio.com, Replay every Sunday from 9:30PM – 12:30AM EST on CNEU Radio, Replay every Tuesday from 9PM – Midnight EST on NUROQ FM Radio, and send your requests toTurbo@bullspikeradio.com

Here ya go, last weeks picks from THE ASYLUM:  •    Alice (From “Alice In Wonderland”) by Avril Lavigne•    Wish by Alien Ant Farm•    We’re An American Band by Poison•    Jihad by Slayer•    Beast And The Harlot by Avenged Sevenfold•    Alienate Me by Coal Chamber•    Linchpin by Fear Factory•    Far Away by Statues of Liberty•    Cold […]

This week on THE ASYLUM it was all music as I’m fighting either allergies or a cold. Here’s this weeks playlist (click here for podcast): Dumb [Live] by Nirvana Everlong by Foo Fighters Rock Bottom by Kiss Outer Space by Ace Frehley Mama Kin by Aerosmith Beautiful Dangerous by Slash featuring Fergie Fire It Up […]

This week on THE ASYLUM was an ALL MUSIC show. Here’s what was played (click here for podcast): Empire by The Winery Dogs Turn Back Time by Revolution Saints Boneyard by Devil City Angels Turnin’ Left by Chickenfoot Nobody Knows by RC Budaka Get Up, Get Ready by The Dead Daisies Fatal Illusion by Megadeth […]