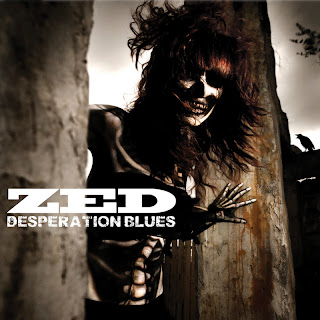 Great Rock and Roll doesn’t just happen. It’s made. With sweat, swagger and alcohol. And ZED makes rock the way it should be made. Loud guitars, a shot of whiskey and a middle finger.  ZED’s latest album Desperation Blues was released on May 21st and the critical acclaim continues to come in.

Today ZED has partenered up with RevolverMag.com the online home of Revolver Magazine, for an exclusive premiere of the band’s new lyric video.  The video is for the song “More”.  Check it out HERE.

Desperation Blues is streaming in its entirety HERE.

The band recently completed work on a video for the first single from the album entitled “Please”.  Check it out on their YouTube Channel HERE.

Desperation Blues is available for order from ZED’s store HERE.  The album can also be ordered on Amazon and iTunes.

San Francisco Bay Area’s ZED takes it cues from the greats like Zeppelin, Sabbath and AC/DC, but combines them with their contemporary musical influences such as Clutch, Rage Against the Machine and Queens of the Stone Age, creating a mixture that is new, yet familiar. With this explosive sound they are bringing back the guts, the grit and the balls to Rock. And they won’t stop until they succeed. At least in getting drunk and having a good time.

In June of 2012 ZED entered Sonic Room Studios with Tim Narducci engineering and producing their sophomore album Desperation Blues. With the studio expertise that he gained from working with greats like Bob Rock (Metallica, The Cult) and Howard Benson (P.O.D., My Chemical Romance), Narducci was able to harness the raw energy and essence of ZED in a way that had not been done before. And what they came out with was 46 minutes of giant, hook filled riffing, crafted into 10 songs that make up one beast of an album.

Mayhem, whose sixth album, Daemon, is available digitally, with a physical release arriving tomorrow, share a video for “Falsified & Hated”. “This is the first official music video we have released, so indeed some thought went into this,” explains Teloch. “Instead of having us filmed at some dodgy location with instruments not even plugged in, we did […]

Many of us in rock and metal have been playing air guitar to Glenn Tipton of Judas Priest for decades. But unfortunately those air guitar days will only be in our homes and not out in arenas with today’s announcement. It was announced that that Glenn’s diagnosis of Parkinson’s Disease ten years ago has progressed to the point […]

There’s no time wasted when it comes to one of Canada’s most thrilling metal bands STRIKER. In 2016, they unleashed their award winning Stand In The Fire, their fourth album and first release via their own independent label Record Breaking Records. Kicking off the new year! These shredders return in 2017 with their fifth self-titled studio […]