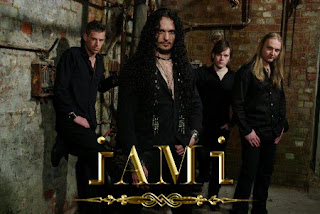 The track is called ‘This Is My Life‘ and is available to listen to in full right now on the band’s official website by clicking here.

The band will be fully unveiled on Sunday May 27th at Birmingham’s O2 Academy 2 when I AM I make their live debut. The line-up is Paul Clark Jr who was Manowar’s deputy drummer for their 2011 European tour, Jacob Ziemba on guitar and Neil Salmon on bass.

The debut promo video for the song ‘Silent Genocide‘ will be released in late April.

‘Event Horizon‘ will be the first ever Heavy Metal album to be released solely on USB. As the major record labels are almost certainly going to cease production of compact discs by the end of 2012, I AM I are one step ahead of the game by releasing this groundbreaking album in a groundbreaking format.

The USB stick will be packaged in a CD case and will include full artwork – which is stunning – and all the usual content you would expect on a disc and more. The album will be available to pre-order very soon from the Official I AM I website by clicking here.

Tickets for the 27th May debut show at Birmingham’s O2 are limited to 600 and are also available from the Official I AM I site by clicking here.

600 special commemorative t-shirts will be produced for the gig and are an exclusive free gift for fans who buy tickets. The shirts will be numbered and will correspond with the ticket number and are sure to become collector’s items.

The album artwork and track listing and further I AM I details will be revealed soon.